For the past three years Heswall Primary School, Wirral have been busy raising awareness about the importance of animal conservation locally and globally, they have done this through film, events and partnership with schools around the world. Annually, Heswall organise and host the ‘Wirral Science Under the Stars’ event attracting over 1200 attendees including families, students, environmental professionals and over 50 businesses from around the North West. Each year the highlight of the event is a collaborative film shown on a giant, cinema screen. Written and created by Heswall Primary (in collaboration with 5 other Wirral schools), this year’s film ‘Extinction is Forever,’ raised awareness of global conservation issues. Alongside the film screening, pupils also participated in a series of lessons designed to raise awareness of endangered species, hosted a DinoSnores sleepover focusing on extinct species and even came to school dressed as an endangered animal of their choice. 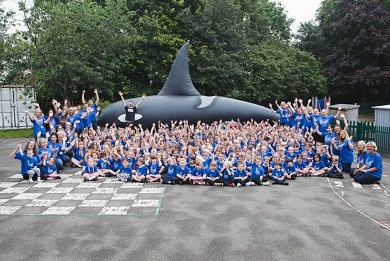 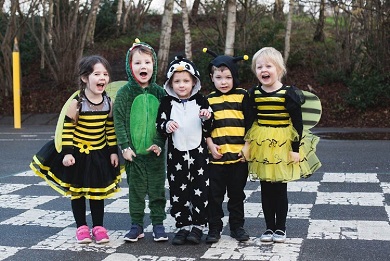 After filming and showing Extinction is Forever, their conservation efforts continued. The pupils of Heswall decided to develop a marine-based conservation initiative ‘Ocean Blue’ to raise awareness of the effects of ocean plastic on marine life. They learnt about ocean conservation through inviting experts to their school before making a whole school plastic pledge and hosting a Plastic Pledge Market with plastic-free stalls, plastic-free information points and a plastic-free pledge tree. For the summer holidays, each pupil was given a #HeswallOceanBlue t-shirt to help inspire others around the world. During their summer holidays Heswall’s pupils conducted their own beach cleans and even spoke to hotels and restaurants about reducing their single-use plastics. #HeswallOceanBlue T-shirts were even sent to their twin school, in Uganda, who have been inspired to begin their own single-use plastic campaign.

Heswall Primary’s mission is to create opportunities for their children to become conservation agents of change and they are proud to have given their children the chance to have an impact locally and globally.