Catherine Junior School is a large inner city school in Leicester who have been a Green Flag Eco-School for just over a year. In that time, they have gone above and beyond to fully embrace the Eco-Schools ethos.

In 2018-2019 Catherine Junior School participated, for the first time, in the international Wrigley Litter Less campaign. A campaign, involving 3 million young people from Eco-Schools across the globe, aimed at highlighting the environmental impacts of litter and changing future behaviours. Catherine Junior School were also chosen to be a hub school for the Litter Less Day of Action in March 2019– giving them the perfect opportunity to learn from more experienced schools and meet new Eco-Friends. Children and staff at Catherine Junior School fully embraced this role inviting schools to eat lunch in their newly built Peace Garden before marching to Abbey Park in Leicester City, chanting all the way and even bringing traffic to a stand-still with their Litter Less message. 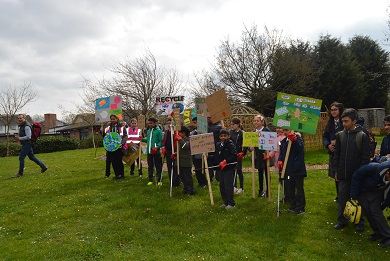 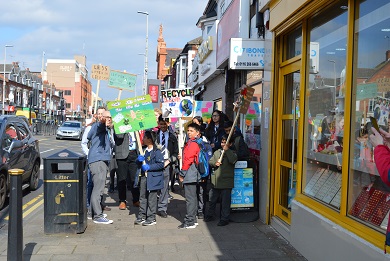 On the day, Catherine Junior school welcomed a number of VIPs, including a Daily Mail journalist and photographer, members of Leicester City Council, a representative from Mars Wrigley UK and of course Eco-Schools England Manager Lee Wray-Davies. With so many important people in attendance, pupils and staff at Catherine Junior School decided it was a perfect opportunity to showcase all the hard work they had put in to earn their first Eco-Schools Green Flag award. VIPs toured their Wildlife/Peace Garden, visited Brad the Turtle (made from single-use plastic litter) and were amazed by Catherine Junior School’s recycled greenhouse made from 2,000 plastic bottles. Pupils on the Eco-Committee even took the opportunity to quiz Louise (from the Daily Mail) on her reporting techniques, so they could better demonstrate their eco-actions in their own school newspaper.

Many of the parents from Catherine Junior School attended the litter picking sessions and alongside pupils managed to pick up a shocking 21.89kg of litter over six separate picks. Even more shockingly, a lot of litter was discovered to have been thrown over a fence and into their school grounds. The Eco-Warriors encouraged the Daily Mail photographer and journalist to document their findings in order to highlight the issue at a national level – helping to launch our Keep Britain Tidy 2019 ‘Great Big School Clean’. 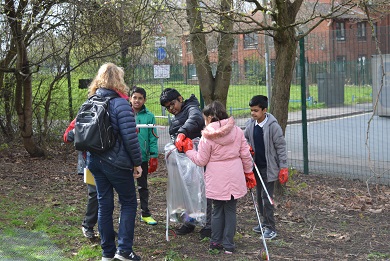 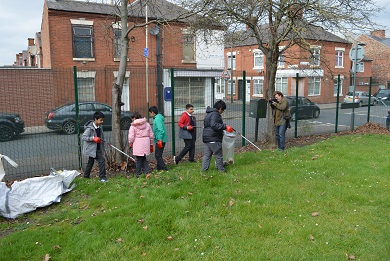 Now Catherine Junior School have big plans for this year’s Litter Less Campaign. Mr T (Eco-Coordinator) has already been involved in training new schools signed up to the campaign and his Eco-Warriors are acting on their findings from last year. At the moment, the Eco-Warriors are organising a meeting with local city councilors to persuade them to allow the school to adopt three public litter bins – they will then have signs especially made for them highlighting litter-related issues in a variety of languages. They also plan to beautify the area by planting flowers in the hope that this will lead to a reduction in litter. 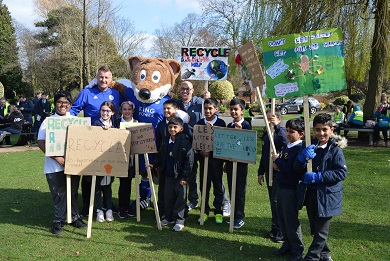