New to the Eco-Schools programme, Sutton High School in Surrey have been working on a variety of projects to use as evidence towards their first Green Flag Award. One project in particular captured the imagination of the whole school community.

Working on the Eco-Schools Marine topic, a DIT (Do It Together) project was created to highlight the impact of single-use plastics (particularly plastic bags) on the marine environment. Every pupil in the school was asked to donate a used plastic bag and, over the period of a week, hundreds of students and staff worked together to create a huge, whale art installation on a fence surrounding the school’s netball court. Appropriately, they named him Baggy and he looked fantastic! Next it was their prep school’s turn to DIT, they used the plastic bags they collected to create a second piece of art in the form of a whale calf called Baguette.

Both art installations have been immensely successful in highlighting the impact of single-use plastics on marine environments and making people consider the throw-away culture we live in. Each installation has been in place for nearly half a year and they are used as a visual teaching resource to show that even ‘biodegradable’ plastics remain largely unchanged despite being left out in the elements.

Now, Sutton High School have begun working with other local schools to create further plastic bag art installations spreading their message further. They say, “One step at a time, the message is being spread across our local community about the climate change emergency we are living in. Seeing the success of this DIT message we will not stop here; we wish to involve more and more local schools.” 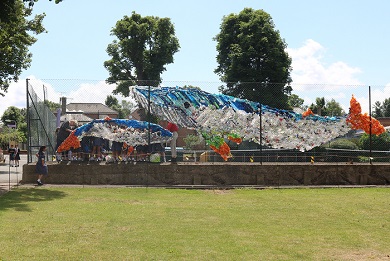 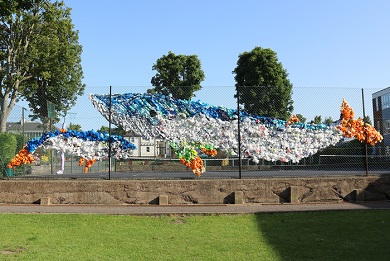