A school with plenty of trashion sense

A school with plenty of trashion sense

Posted 4 years ago in News

It’s been quite a year up to now for St Mary’s School in Colchester. They have been very busy with their annual Eco Week which gives the school the chance to focus on environmental issues and to learn more about sustainability.
The schools looked into how electric cars work and their benefits, investigated renewable energy, researched how the UK has been influenced by other cultures in regards to language, food and migration and created a mural for the school.

To finish their busy week of learning, they took part in a fun Trashion Show – fashion made out of trash.
The pupils were challenged to design and create a fancy dress costume made out of litter (basically anything that can be re-used or recycled). Many items were made out of old costumes from past school productions including an Amazing Technicolour Dreamcoat from Joseph. They had two weeks to make their costumes and there was no set theme, they were encouraged to let their imaginations run riot.

Once their costumes were ready, the Trashion Show took place during an assembly and the pupils were able to model their creations. 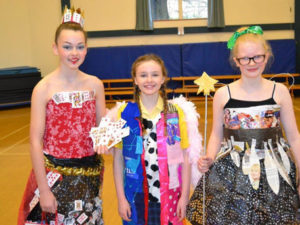 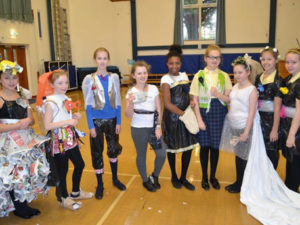 As you can see by these photos, they were all very creative and created some amazing designs using old newspaper, sweet and crisp wrappers, bubble wrap, old carrier bags, CDs and even playing cards.

Not only have the pupils of St Mary’s create these amazing costumes but they have also been awarded their 4th Green Flag Award this year. This shows their commitment to learning about sustainability and finding creative and fun ways to do it.